How To Use: 在 vs. 再 In Chinese 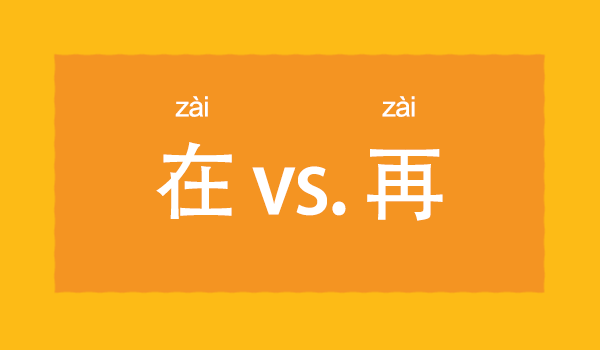 A homophone is a word that sounds exactly like another, except it’s spelled differently. English has some of those: “To,” “too,” and “two.” “Your” and “you’re.” The notorious “their,” “there,” and “they’re” trio. Incorrect usage of homophones happens all the time, resulting in headache-inducing typos like, “your always like that” or “their finally here.” (There are also some English words that sound exactly the same in Chinese. Check out our post here.) Like English, Chinese has many homophones of its own—many, many more than English, in fact. Compared to writing Chinese, speaking Chinese is a walk in the park. Open up a Chinese dictionary, and you’ll see that multiple different characters share the same pronunciation. It’s seldom to see a character have a unique pronunciation all to themselves.

Some of the commonly used Chinese homophones are 的, 地 and 得 (de); 她, 他, 牠, and它 (ta); and再 (zài), 在 (zài). 再 (zài) and 在(zài) are some of the most frequently seen homophones, and likewise most frequently misused. Just like mixing up“their, there,” or “they’re” is frowned upon, using the wrong “zài” is an indicator that one’s rudimentary Chinese skills are shaky.

How can you know when to use which “zài?” Worry no more. Here are some pointers on what each character means and when to use them!

她在说话 (tā zài shuō huà)
She is speaking.
在modifies 说话, so "speak" becomes "speaking." The same applies to other verbs; 在 implies the verb is in a present tense.

在哪里? (zài nǎ lǐ)
Where is it?
Likewise to the previous example, to identify what subject the phrase is referring to just place the noun before it and to show what action is performed just add the verb after it. “Where is he performing” is written as “他在哪里表演? (tā zài nǎ lǐ biǎo yǎn?)”

再见 (zài jiàn)
See you again.
Said when people are parting as a “Goodbye.” Literally means, “to see again.”

再一次 (zài yī cì)
One more time.
The "再" modifies "一次," showing the action has been performed before.

我会再给你一支铅笔 (wǒ huì zài gěi nǐ yī zhī qiān bǐ)
I will give you another pencil.
Like the example above, the "再" implies that the action has been done before. Without the "再," the sentence would just be, “I will give you a pencil.”

再给我一点时间 (zài gěi wǒ yī diǎn shí jiān)
Give me a bit more time.
As the pattern goes, "再" suggests that the speaker already got some time, but is asking for moretime.

先… 再… (xiān … zài…)
First… then…
This is often used in sentences to convey the sequence of events. For example, to say “First eat dinner, and then eat dessert,” the sentence would be “先吃晚餐再吃点心 (xiān chī wǎn cān zài chī diǎn xīn)”

Can we use them together? You betcha.

With this knowledge in your mind bank, the path to learning Chinese will be that much easier. Leave a comment below if you have any more questions about when to use "再" or "在!"

Want to learn more common Chinese homophones? You can check out our posts on the three "de" particles: “的, 地, 得,” and the three "ta" pronouns: “她, 他, 它.”