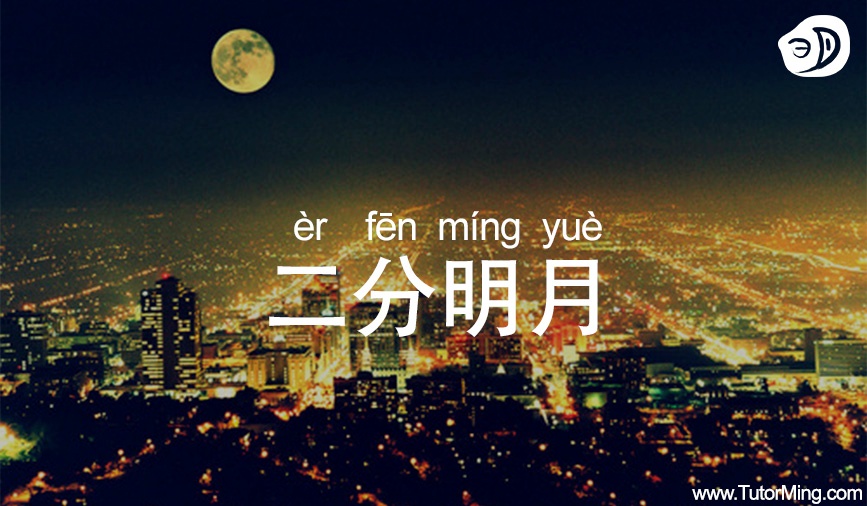 The idiom, 二分明月, combines the meaning of “flourishing” and “bustling” into one, essentially describing places like New York, Los Angeles, Beijing, and Shanghai, all of which are incredibly prosperous cities.

Throughout Chinese history, the city of Yangzhou has been a symbol of prosperity. Present-day Yangzhou spans much more land than its present location in Jiangsu (江苏；jiāng sū), and because the city was and is near the Yangtze River, trade flourished and continues to flourish in Yangzhou.

The origins of this city start in myth. 大禹 (dà yǔ), a mythical leader made water and started Chinese civilization. As he was making water, DaYu began to split China up into nine sections (九州; jiǔ zhōu), and one of those sections was named Yangzhou. The name Yangzhou referred to the section of Chinese land below the Yangtze River, termed 江南 (jiāng nán). Throughout various time periods and dynasties in Chinese history, Yangzhou encompassed present-day provinces including, 江苏 (jiāng sū), 安徽 (ān huī), 江西 (jiāng xī), 浙江 (zhè jiāng), and 福建 (fú jiàn.)

Because of Yangzhou’s proximity to the Yangtze River, trade was always successful. As such, the living standards of people in Yangzhou were much higher than those living further inland because of the amount of money going in and out of Yangzhou. The idiom 二分明月 specifically describes this prosperity.
Later on, people expanded the restrictions of the idiom to describe any prosperous city.

HOW TO USE “二分明月” IN A SENTENCE

1. 好莱坞是影视发达之地，所以我一直觉得它二分明月，实在是太繁华了。
Translation: Hollywood was the start of the filming industry and that’s why I think Hollywood is anincredibly prosperous city.

2. 能用二分明月形容的城市不多，因为现代社会的城市太多，没有特色
Translation: Prosperous cities are numbering fewer and fewer because there are too many cities in modern society, and none of them have any special characteristics.

This idiom is not typically used in modern times because one could easily substitute 繁华 (fan2hua2), meaning prosperous, in place of 二分明月. Despite its infrequent usage, many people know this idiom because of Chinese history so yes, knowledge of this idiom and its story is useful.