The Legend of the White Snake 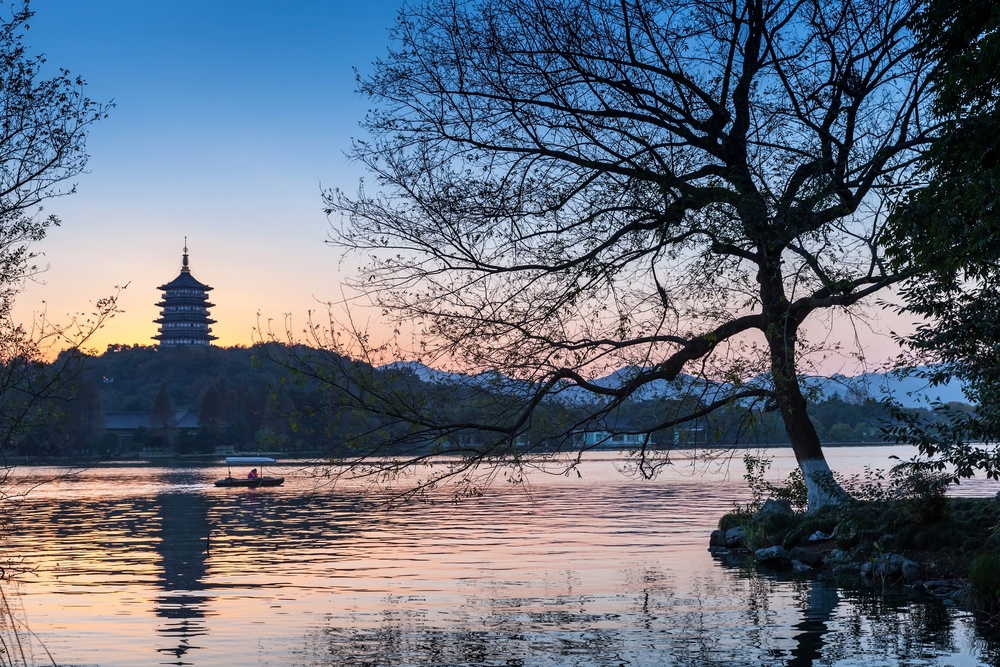 The Legend of the White Snake (白蛇传; Bái Shé Zhuàn) is a Chinese fairytale about a snake spirit who falls in love with a human named Xu Xuan, and the ensuing chaos that follows.

The Legend of the White Snake is one of the Four Classic Folk Tales; Chinese written works that have literary significance. The most recent available written text is from the Ming Dynasty (明朝 Míngcháo, 1368-1644 CE). However, the idyllic lakes and famous pagoda of the Southern Song Dynasty capital Hangzhou (杭州 Hángzhōu) are the for much of its drama. The story is great to learn because it spans several major geographical locations important to both historical and present-day China, and reflects the major philosophical influences that shaped Chinese society. The fact that the story is rooted in many different aspects of Chinese culture may be down to it having originated from folklore and then altered many times over the course of hundreds of years. While Daoist themes of immortality and are at the core of the story, Confucian and Buddhist influences are also apparent, perhaps later modifications to the story reflecting the different social attitudes of different periods in China.

This tale begins with a good-natured boy by the name of Xu Xian (许仙 Xǔ Xiān) in Hangzhou. One day he purchases some tangyuan (汤圆 tāngyuán) from a peddler near the West Lake, not knowing they are actually immortality pills in disguise. After consuming the food, he feels nauseated, and soon the pills were out of his stomach and into the lake, where a white female snake spirit who practices Daoist (道教 Dàojiào) magical arts discovers them. Knowing that a neighboring turtle is jealous of her luck, the snake quickly ingests them and gains spiritual powers. As a Daoist spirit, she has been searching for immorality her whole and feels an immense gratitude and spiritual connection with Xu Xuan.

While traveling in the human realm, the white snake finds a green snake at the mercy of a beggar. Pitying the snake, she transforms into a human and rescues it, saving its life. Grateful for her intervention, the green snake swears to follow her until the end of time.

Years pass after this incident, and the white snake has now adopted the name Bai Suzhen (白素贞 Bái Sùzhēn) and the green Xiao Qing (小青 Xiǎo Qīng). During the Qingming Festival (清明节 Qīngmíng jié), they coincidentally meet Xu Xian at the Broken Bridge, and Bai SuZhen eventually gets married to him.

Xu Xuan and Bai SuZhen settle down and open a medicine shop. However, during this time, the turtle spirit has learned enough of the Daoist arts to take human form. He takes the shape of a Buddhist monk called Fa Hai (法海 Fǎ Hǎi). Miffed that the pill was taken by Bai SuZhen, he approaches Xu Xian, telling him that his wife must drink realgar wine (雄黄酒 xiónghuángjiǔ) during the Duanwu Festival (端午节 Duānwǔ jié). Realgar wine is traditionally believed to repel harmful creatures and spirits during a time of year that’s plagued by poisonous creatures. The wine exposes Bai Suzhen to be a snake, and Xu mortified to find his wife has been a serpent all along, dies of a heart attack.

Bai Suzhen and her loyal Xiao Qing then travel to Mount Emei (峨眉山 Éméi shān), one of the of the Four Sacred Buddhist Mountains of China (where also many martial arts traditions origin), to find the cure to revive Xu Xuan. After Bai Suzhen revives him, Xu Xian confesses that he still loves Bai Suzhen. With his plan foiled, Fa Hai imprisons Xu Xian to bait Bai Suzhen. However, weakened by a pregnancy, Bai Suzhen’s spiritual power has been drained and she isn’t able to rescue Xu Xian. Later Xu Xian manages to escape his imprisonment and reunite with Bai Suzhen in time for their son Xu Mengjiao (许梦蛟 Xǔ Mèngjiāo) to be born. However, their happiness is short-lived as Fa Hai finds them back in Hangzhou, and imprisons Bai Suzhen in the Leifeng Pagoda (雷峰塔 Léifēng Tǎ).

Years later, Xu Mengjiao passes the imperial examinations, an insanely difficult and competitive test that young Confucian scholars from wealthy families all over the country spend their whole lives studying for. Competition in the rigorous civil service exam is enough to make even students competing for top spots in China’s modern educational system cringe. Returning home with the title of top scholar, Xu Mengjiao has achieved the highest level of success in the whole empire. A pious Confucian, he returns to his native  to pay respects to his mother at Leifeng Pagoda. Touched by Xu Mengjiao’s filial devotion, the heavens free Bai Suzhen from imprisonment, allowing the family to reunite.

The main philosophical influences in China, Buddhism, Daoism, and Confucianism, coexist in the story’s main and combine to deliver the moral message of the story. The Legend of the White Snake’s core plot is about the Daoist search for immortality, and the struggle between good and evil, or yin and yang (阴阳 yīnyáng). Daoism originated along with Confucianism and Legalism as a competing, but often complementary philosophies of the Warring States period (战国时代 Zhànguó shídài, 481-403 BCE), which was roughly contemporaneous with classical periods in ancient Greek and Indian societies. Daoism was very important to many rulers in ancient China, starting with the first emperor Qin because it was believed that Daoists were the only ones who knew the secrets of immortality. The struggle between Bai Suzhen and Fa Hai over these immortality pills is the main conflict that develops, which strongly reminds us of the Daoist dichotomy of good versus evil – yin and yang.

In earlier versions of the tale, Bai Suzhen was probably construed to resemble yin, or the feminine and evil, since she disrupts the normal balance of life by becoming a human and seducing a morally upright man. An antagonist with unnatural and her monstrous tirades drown many innocents as she attempts to rescue her husband. Bai Suzhen is first exorcised the during the Duanwu festival, a traditional holiday reserved for ridding oneself of evil spirits. Although she is not undone, she later gets what she deserves when she is imprisoned in a famous temple, and the natural balance of is restored. Daoism’s essential tenet is to go along with the natural flow of the and respect the harmony in the balance of life’s opposing forces.

However, the fact that Bai Suzhen was acting out of love for her husband and gave birth to a son suggests that she could also be interpreted as a hero from a Daoist perspective, as her drive to reunite with her family reflects the natural yin and yang balance between masculine and feminine forces. With this perspective in mind, we can see how the story evolved into more romantic versions that sympathized with that of the White Snake Lady.

Later versions have evidently modified the original narrative, clearly demonstrating the influence of Buddhism and Confucianism. In the most recent Ming Dynasty text, Bai Suzhen saves her husband by traveling to the Buddhist sacred site, Mount Emei, and procuring a magical root. In this plot twist, we see how Buddhism and Daoism intertwined, as immortality medicines are a Daoist tradition, although Bai Suzhen has to go to a sacred Buddhist mountain to find them. Magical medicines are a persistent theme throughout the tale, and Bai Suzhen and Xu Xian open up a medicine shop when the settle down for the first time together. In ancient China, Daoist scholars strongly influenced the development of Chinese medicine with discoveries likely made while searching for the elixir of immortality (incidentally, they may have also invented gunpowder). Although Bai Suzhen is eventually defeated by the turtled-turned-monk Fa Hai, she is eventually saved by her morally upright, Confucian scholar son, who returns to restore order and balance to the chaotic story.

By the time the Ming Dynasty version had been written, the influence of the Confucian civil service exam on Chinese society was significant, which is clearly apparent in the story. Not only did the civil service exam force the elite to memorize the Confucian classics in order to secure their social status, but it also accustomed society as a whole to think of government officials as benevolent Confucian . Bai Suzhen’s son Xu Mengjiao embodies a Confucian scholar when his act of filial piety saves the day after all the chaos and turmoil of the earlier conflict in the story, giving us a happy ending. In this Confucian appropriation of the tale, Xu Mengjiao is your classic knight in shining armor who comes to rectify the mess the meddlesome Buddhist and Daoist monks have caused. In fact, at many times in Chinese history, Confucian scholar-bureaucrats tried to curb the influence of Buddhism and Daoism in the imperial court. The addition of a Confucian scholar restoring balance and harmony to society demonstrates how successful the scholar-gentry bureaucratic ruling elite had become in influencing culture by the Ming Dynasty.

At least on the surface, however, the three belief systems coexisted peacefully. The manner in which the morality of the story is derived from these different belief systems reflects how often Buddhism, Confucianism, and Daoism built on and complemented one another to form the moral attitudes of the day.

Interested in learning more? The Legend of the White Snake has many versions out there that are all unique and captivating in their own way. Remember to stay tuned for our next installment of the Four Classic Folk Tales!