Amidst the noisy hustle and bustle of major Chinese cities, using sign language to communicate numbers is commonplace and sometimes necessary when your voice could easily be drowned out by the crowd. These hand signals may have originated from ancient China as a way for businessmen to communicate bets discreetly in public places, or as a way to bridge the gap between different languages and dialects. In modern day China, they remain an important means of and are especially useful to Chinese learners attempting to master day-to-day commercial interactions.

Learn How to Say One through Ten - With your Hands!

The number signals for one through five are done just as you would normally count from one to five with your fingers. Six through ten and zero, however, have unique hand symbols for each and can be expressed using just one hand.

Zero (零 líng) is done by balling your fist, resembling the shape of a zero. Sometimes this is also used as the symbol for ten (see below.) 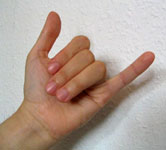 The gesture for six (六 liù) is very much like the hang loose sign made famous by Hawaiian surf culture. Pull your middle three fingers into your palm, and have your thumb and pinky stick out. However, it’s not necessary to wriggle your wrist like you would when gesturing to surf buddies. 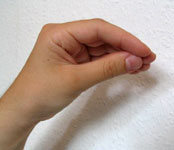 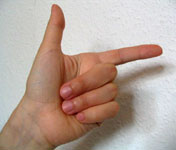 Eight (八 bā) looks sort of like a sideways “L”, or as if you fashioning your fingers into the shape of a handgun. With your palm facing you, point your thumb upwards, and point your index finger across your body. 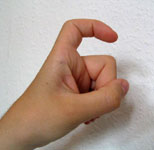 Nine (九 jiǔ) is indicated by making a hook with your index finger and closing the rest of your fingers. The hook resembles the shape of the character for nine, 九 (jiǔ). 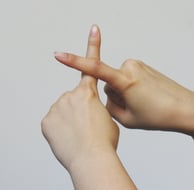 Ten (十 shí) can be done by holding your arms up and intersecting both index fingers to make a cross reflecting the character 十 (shí). In many cities across China, it is more common to signify ten with a fist as you would for zero. However, I personally prefer to use the crossed fingers version because I saw it more while I was living in and because it eliminates the possibility of confusion with zero.

Okay, so zero to ten is pretty easy, but how do you express large numbers with hand gestures in Chinese? The standard method of saying large numbers with hand signals is to do each digit of the number individually, as you would read a phone number. For example, 16 is expressed with an 一 (yī) and a 六 (liù). As you get to larger numbers, you shake your fist for each successive zero is a way to get your point across. However, from my experience in China, people often rely on context to have their audience understand the number of zeroes they are talking about. Therefore, an 一 (yī) and a 六 (liù) in hand signals could mean 16, 160, 1,600… etc.

Related: How to Say Numbers in Chinese

Keep in mind that there is a lot of diversity between different regions in China, so hand signal customs do vary from place to place. That being said, most people are familiar with the standard hand signals we’ve discussed.

Number hand gestures are also the go-to standard of communication in Chinese drinking games (划拳 huáquán, or 猜拳 cāiquán). However, one through four differ a bit from the normal gestures, possibly because they make for faster hand gestures in games that rely on speed.

The gestures for one through four differ in the following ways:

Two (二 èr): Thumb up and index finger pointed out, just like the normal hand signal for 八 (bā). Keep the other fingers closed.

Three (三 sān): Have your thumb, index, and ring fingers extended, while the last two fingers are closed. You can also close your thumb and index fingers and extend all other fingers just as the gesture for perfect is done in the west.

Four (四 sì): Close your thumb and extend all other four fingers.

Using these distinctive hand signals in drinking games are sure to earn you extra points with your Chinese drinking buddies. 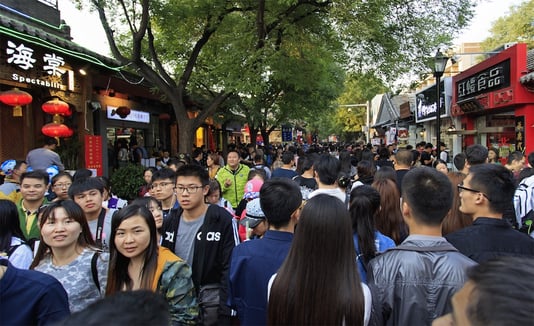 One of the best ways to explore China is to visit the markets and restaurants frequented by locals. Haggling and ordering food are also some of the best ways to give your Chinese some intensive practice. Fortunately, using hand signals for numbers is very customary in China. Don’t be afraid to reinforce what you’re saying with a hand gesture, as it could save you a lot of trouble, especially in a crowded or noisy area. Even if you are familiar with the number system, it pays to have these hand gestures on, well, hand, because it gives you the assurance that you can be understood by anyone if all else fails.

What’s your experience with Chinese number signals? Let us know in the comments below.