How Is Christmas Celebrated In China? 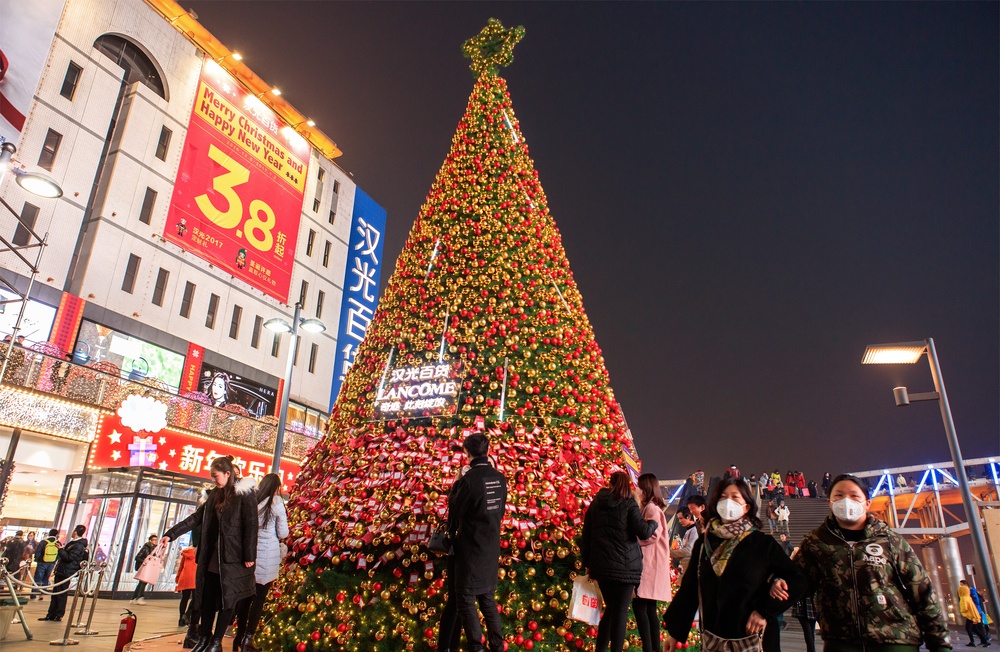 In the shopping districts of major cities across China, Christmas music can be heard starting late November. Christmas (圣诞节 Shèngdàn jié) is not a public holiday, but it is an increasingly popular diversion for young and the day when people tend to spend the most money shopping (although it doesn't come close to  day for online shopping). Chinese students who have studied abroad in the West and come back to China, or "sea turtles" (海龟 hǎiguī) as they are called, are suspected to have contributed much to the general public knowledge about this Western holiday. In recent years, a uniquely Chinese way of celebrating Christmas has emerged, egged on by brands eager to see the holiday cemented into the Chinese mainstream.

While the popularity of Christmas grows with every year, the main difference is that is a light-hearted holiday rather than a serious one. Chinese New Years usually falls within five weeks of Christmas, making Christmas a sort of warm up round for the all-important, family-oriented Chinese holiday. China Daily reports that Christmas Eve is the biggest in-store shopping day of the year, pointing to its popularity among the youth as the reason that so Chinese tend to spend money around Christmas. In any given major city, most people between the ages of 15 and 45 will be out and about with their friends or lovers to celebrate the occasion. Christmas time is the only time of the year that Beijing University's famous Weiming Lake is open for ice staking. For many young Chinese, Christmas is an opportunity to celebrate the holiday season with their friends or lovers before they go home and spend time with their families over the Spring Festival holiday period.

The retail sector has clearly capitalized on Christmas, holding sales events and outfitting malls with towering Christmas trees and promotional events featuring a Chinese rendition of Santa Claus and his helper elves. For whatever reason, Santa Claus (圣诞老人 Shèngdàn lǎorén) is often seen playing the saxophone, while his "helper elves" typically are scantily-clad young women referred to as "Santa's sisters." The reason for Santa Claus playing the saxophone has never been identified, but young women dressed up as part of an event is a common sight in malls across China all year round (the PR events industry is huge in China). This commercialized version of Christmas is the one most Chinese are familiar with, for China's millions of Christians, it is as important an occasion for community activities as it is in the West.

A Christmas tradition that has been lost in translation, possibly due to the influence of gift-giving culture, is the exchange of presents. Smaller gifts exchanged between friends and co-workers such as cellophane-wrapped "Christmas apples" are more common than gifts given to family members. The peculiar tradition of eating apples on Christmas Eve originates from the Chinese translation of "silent night" (平安夜 Píng'ān yè), which sounds like the Chinese word for apple (苹果 Píngguǒ). Christmas Eve is called "silent night" (平安夜 Píng'ān yè) in China, which can also be interpreted as "peaceful night."

Christmas Made in China

According to China Daily, a town in Zhejiang province called Yiwu is responsible for manufacturing 60% of the world's Christmas decorations. Yiwu is famous for being a marketplace for wholesale goods, where buyers from all over China and across the world negotiate prices with the local manufacturers, although much of the international middleman business is being shifted to websites like Alibaba. In 2012, there were 750 manufacturing companies around Yiwu that were churning out Christmas products, from plastic trees to Christmas lights and stockings. Given that Santa's workshop is seemingly located some 300 miles south of Shanghai, it is perhaps unsurprising that China is so enthusiastic about celebrating Christmas. Globalization is something the modern Chinese dream thrives on.

Read More: Why Chinese New Year Is The Best Holiday Ever