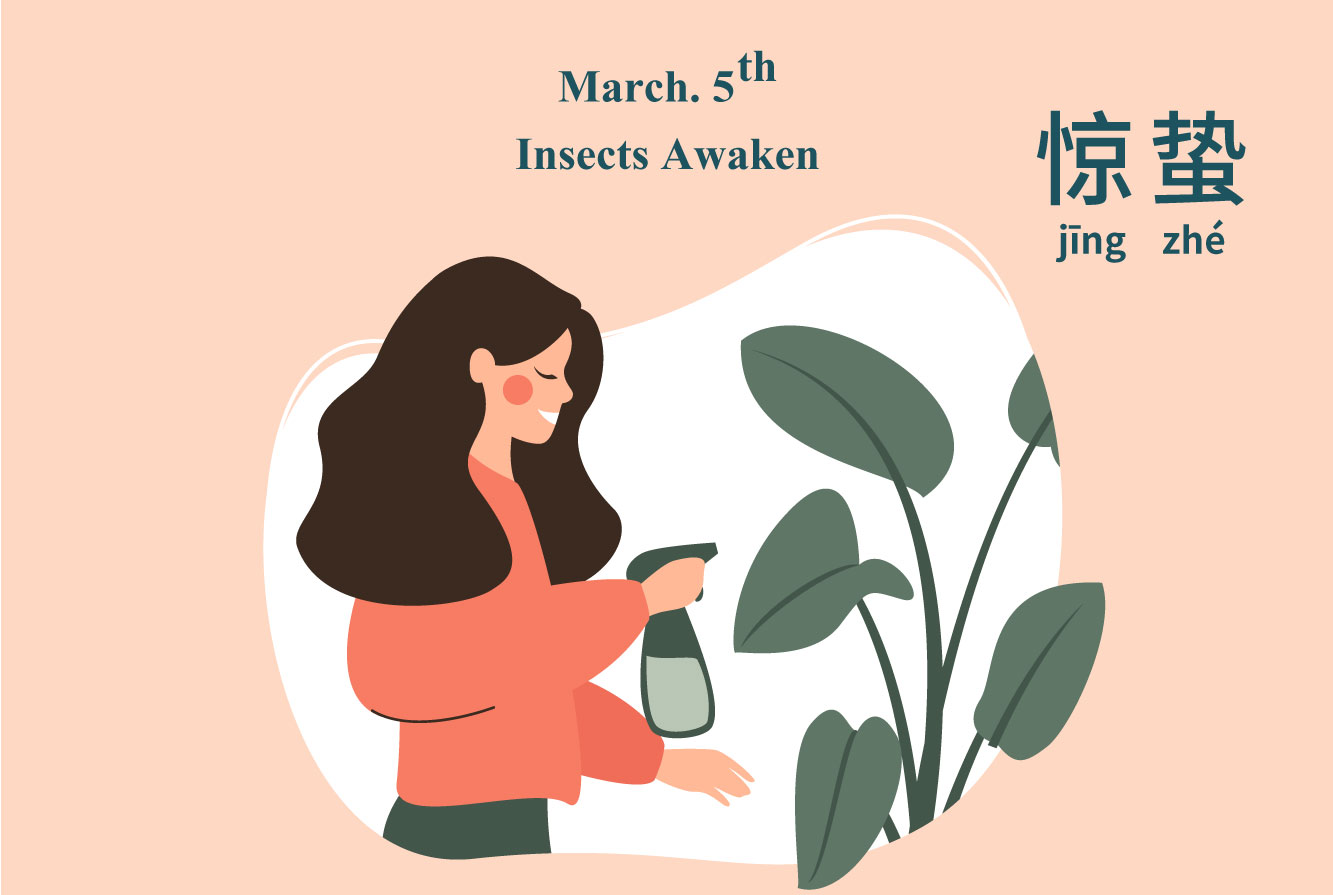 惊蛰, the third solar terms of the year, indicates that insects are all awakened from cold weather by spring thunder, and so does the earth. Starting from the day of 惊蛰, the temperature and the rainfall increase significantly, and the weather is getting warmer as the winter time is almost to the end. It’s a perfect time for agriculture activity since spring is about to come!

There was an old Chinese saying that 未过惊蛰先打雷，四十九天云不开 wèi guò jīng zhé xiān dǎ léi, sì shí jiǔ tiān yún bù kāi which literally means if the spring thunder occurs before Insects Awaken, the cloudy chilling day would continue for 49 days, and that means the weather of the year would be quite different than usual.

People from Guangdong area have traditions of 祭白虎 jì bái hǔ and 打小人 dǎ xiǎo rén on the day of 惊蛰.

Chinese people believe that the White Tiger is the god of foul spirit and is awakened from hibernation by the first thunder of spring. Like all other animals, it is starving and desperately searching for food. 祭白虎 means that people would go to temple with sacrifice to feed the White Tiger and to prevent it from hurting people, and it's also symbolized to keep bad luck and disease away.

打小人means to hit the villains. This folk ritual is originated from Tang Dynasty and still quite popular nowadays in Hong Kong. People cut paper into human figure, put personal information on it, cast the curse, and then hit it with shoes or incense. It could be conducted to a group, a certain type of people, or a specific person. Chinese people believe that any places with bad Feng Shui, such as places under a bridge or in a dark alley, provides ideal and powerful condition to conduct 打小人. Usually, 祭白虎 would be the last step of 打小人 to keep all the bad things away.

Associated with rising temperature and humidity, Traditional Chinese Medicine (TCM) suggested that the 阳气 yáng qì of your body is now getting stronger. It’s better to eat lightly and stick your meals with fruits and vegetables. Since most of fruits and vegetables are considered as 阴性食物 yīn xìng shí wù, it helps keep your organ system staying in balance. Eating more fruits and vegetables is never a bad choice, and it’s even better especially during this period of time.

As the growing of 阳气 within your body, heavy meals, such as steaks, pork chops, or any forms of animal fats, might not be good to your body as they are all considered as 阳性食物 yáng xìng shí wù. Consuming too much 阳性食物 might damage the harmony of your body, especially harmful to your spleen and liver. Fruits like 梨 lí and 大枣 dà zǎo are always the best choice during this period of time as sweet food protects your spleen and provides extra support to your organ system well rounded.

Unlike all kinds of animal products, duck meat is the only animal product considered as 阴性食物 according to TCM, so it’s quite brilliant to add this ingredient to your daily diet.