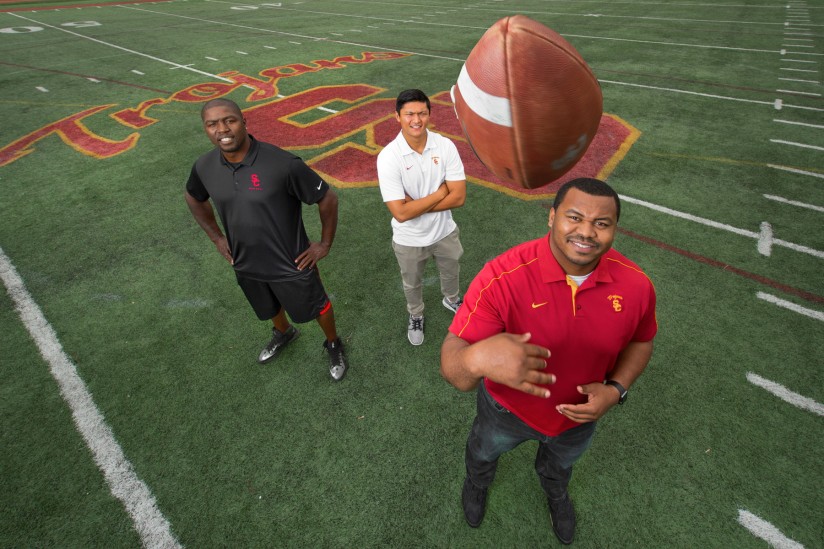 Image and info via USC News.

Chris Barrett and Joseph Krassenstein, two former USC Trojans football players, are piloting a summer football camp for youths in China. The camp will focus on on-field football training and lessons in English.

You may think setting up a sports camp in China would be easy (seeing as China values altheticism and is hosting the 2022 Winter Olympics in Beijing), however American football is vastly unheard of in this country.

In fact, in a country with a population of 1.3 billion people, there is only one American football field. This NFL-regulation-sized field is located in the city of FoShan, in the Guangdong province that is outside of Hong Kong.

Though there is an amateur league, American football is not considered popular in China. If you translate “football” directly in Chinese, you get “足球 (zú qiú),” also known as “soccer.” Soccer is a very popular sport in China. An early form of soccer was invented by the Chinese, and the Chinese female soccer team performs fairly well in world championships. American football, on the other hand, is known as “美式橄榄球 (měi shì gǎn lǎn qiú)” which translates into “American Rugby.”

Given soccer’s popularity, Barrett thinks that there’s an opportunity for many kickers and punters to emerge from China. “I’m positive that in the next five or 10 years from now, we’ll have a Chinese kicker from our program play D1 football,” he said.

The two ex-players will create a football camp for Chinese students, known as the “Student-Athlete Experience.” Student-athletes, while common in the U.S and other Western countries, are almost unheard of in China.

In China, children who are hand-picked to become athletes are enrolled in “sports academies,” where they spend most of their day practicing and training in their sport. Chinese kids who aren’t chosen will go down a very academic route, and eventually prep for the College Entrance Exam that will determine the course of their life.

“It gives them the opportunity to feel what it’s like to be a student-athlete,” Krassenstein said to ESPN. “Do you enjoy this model? If you do, are you interested in coming to America to further your studies? In America we have that balance. We realize we’re not going to change the entire Chinese educational scheme.” Krassenstein continued. “Maybe that will help them in the long run learn to be well-rounded.”

The camp will focus on American football, but also include classes in English, nutrition, and American culture. This camp is set to launch on July 14th, and will be the first of its kind. If it’s successful, they will roll out this program to more cities in China. Eventually, the hope is to bring Chinese football players to the U.S at the high school and college level.

The two former USC athletes are no stranger to China. Defensive lineman Chris Barrett visited China in 2013, when a friend asked him to work with some college players and coaches, according to ESPN.  “I saw the high demand for English education, and I saw how fast football was growing in China,” Barrett said.

Walk-on punter Joseph Krassenstein moved to Shanghai at the age of 13. He was disappointed to find that there were limited options to play American football. He played rugby at the Shanghai American School. Krassenstein is of part-Chinese descent and speaks Chinese fluently.

Can Football Be The New Western Sports League To Take Hold In China?

There are around 60 kids registered for the football camp, and they are currently seeking funding from a title sponsor.

Aside from the camp itself, the former USC athletes may be introducing football as a new sports craze to the Chinese people.

Since American football has such a lucrative model in the U.S, there may be a huge earning potential if the sport takes hold in China. Basketball is a sport that exploded in popularity in China in the last couple decades – to this day, there are over 300 million people in China playing the sport. (That’s more than the entire U.S population.) China has such a strong influence in the basketball space that NBA superstars are becoming spokespeople for Chinese brands. Dwyane Wade signed a partnership with sportswear company Li Ning in April 2014. Of course, basketball’s widespread hype was fueled by the emergence of Yao Ming onto the NBA court.

So maybe all China needs is one football superstar of their own to walk onto an NFL arena.

Economic interests aside, any effort to bridge two cultures is a step in the right direction.

Want to learn Chinese For Business?