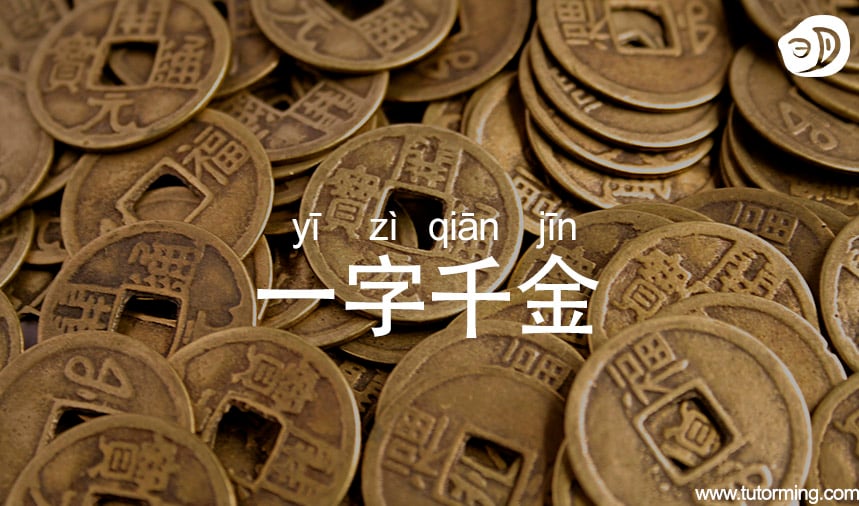 The idiom, 一字千金, directly translates to “one word is worth a thousand in gold.” This idiom describes the importance every single word imparts to a writing piece or poem.

A tip from our Chinese tutors: Many people think this idiom bears the same meaning as “一言九鼎" (yī yán jiǔ dǐng), however that means “keep your word.” Be careful not to mix them up!

千金: a thousand in gold

In the Warring States Period (approx. 475 BC), a man named Lu BuWei (吕不韦 lǚ bù wéi) rose to prominence. He was already an important figure in the political sphere because he had helped a lord (秦庄襄王; qín zhuāng xiāng wáng) gain power. They had a pretty close relationship, as Lu BuWei was willing to give Zhao Ji (赵姬 zhào jī), one of his wives (or dancers, history isn’t sure) to the lord to show his loyalty.

Later on, the lord became the ruling entity of the Qin state, promoted Lu BuWei to a higher position, and after three years, died. His son, the famed Qin Shi Huang秦始皇 (qín shǐ huáng), also known as the first emperor of China, took over and increased Lu BuWei’s rank even more. Why? Qin ShiHuang’s mother was Zhao Ji. Hence, promotion.

This sounds very boring, I know, but I’m trying to generate an understanding of Lu BuWei’s prestige.

So in those days, affluent individuals enjoyed having intellectuals in their home, be it soldiers, military counselors or advisors. Lu BuWei was an official to the rulers of his state. These people, termed 养士 (yǎng shì), acted as officials to the officials.

Lu BuWei kept these people around him because he wanted to stabilize his political power.Stabilize, not increase. So every time Lu BuWei needed help, they would provide their advice in writing. Over the years, Lu BuWei compiled these writings into a book (吕氏春秋; lǚ shì chūn qiū) and termed it “the book on unifying China.” It should be noted that during this period, China was still split up into many different states.

So Lu BuWei wants to make bank and goes to the capital and starts advertising said book. He tells the residents, “If anyone manages to add or delete a word without devaluing the book, I will give them a thousand in gold.”

Later on, people turned his words into an idiom to describe incredibly well-written compositions or the rhetoric evident within a piece. Typically, it is used to describe the effectiveness of short compositions that impart incredible depth.

HOW TO USE “一字千金” IN A SENTENCE

Translation: How is this essay well written? It is worse than compositions written by elementary school students.

Translation: Even though this essay is short, adding extra words would devalue its worth.