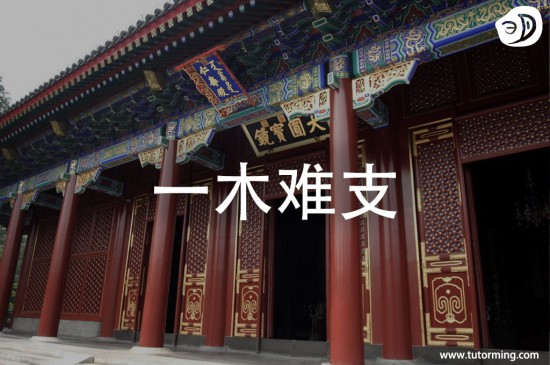 The idiom 一木难支 directly translates to “a single post cannot support a toppling structure.” In other words, when a situation gets incredibly difficult, it cannot be saved by one person (place or thing).

During the Southern Dynasties period in China (approx 420-589 BC), a man named Xiao DaoCheng (萧道成, xiāo dào chéng) accumulated great political power, killed loyal officials, and paid little to no respect to 宋顺帝 (sòng shùn dì), the emperor at the time. Everyone in the political sphere knew that Xiao DaoCheng wanted to usurp the emperor’s power. In other words, he was incredibly cocky. Two loyal officials to the emperor, Yuan Zhou (袁粥, yuán zhōu) and Liu Dong (刘东 liú dōng), made secret plans to get rid of Xiao DaoCheng. These plans failed however, because of Chu Yuan (褚渊, chǔ yuán), an official loyal to Xiao DaoCheng, reported these plans to him. Why? Because politics corrupts and everything usually falls apart.

To protect himself, Xiao DaoCheng sent an army to kill Yuan Zhou, surrounding his home and making it impossible for Yuan Zhou and his family to escape death. Survival of the fittest? Yeah, that’s a good nickname for politics. Knowing that his family would cease to exist in a matter of hours, Yuan Zhou told his son, “I know that one tree cannot stop a mansion from toppling, but we will fight because we will die honorably.” And die honorably they did as 袁粥 and his family sacrificed their lives for what they thought was morally right.

1. In the Qing dynasty, the GuangXu emperor (光绪帝; guāng xù dì), wanted to start reforms in China to catch up with the quickly modernizing Western world. Doing so would ideally protect Chinese borders and allow China to compete in a changing world. But the Dowager Empress Cixi (慈禧太后; cí xǐ tài hòu) saw these reforms as a threat to her power, which was much greater than that of GuangXu, and she shot those reforms down. How? Cixi put him under house arrest for the rest of his life. Cixi was basically telling him, “Go ahead and enforce those reforms now.” It should be noted that many of the officials in court were loyal to the Dowager Empress.

2. In the 1930s, the stock market crashed and launched the United States into the Great Depression. Even though some experts saw the imminent disaster, they had no support and in the end, the comfortable lifestyle of before was no more.

HOW TO USE “一木难支” IN A SENTENCE

Translation: I must use my Chinese-English dictionary to finish my English essay, because I alone do not have the abilities to write it on my own.

Translation: The manager cannot rely on his abilities alone to finish this project. He’s not thinking this matter through.

Translation: I always feel like I do not network well enough and my lack of support makes me feel alone.