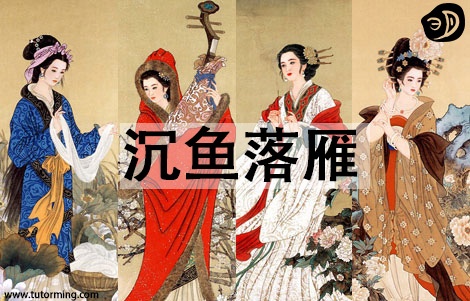 Most people know of the woman whose face “launched a thousand ships.” In the Western world, the story surrounding Helen of Troy and the ensuing doom of all parties involved represents the power of beautiful women in the order of things. The Chinese equivalent? The Four Beauties of Ancient China. Of these four women, three managed to wreak havoc in the political battles rampant in government and have impacted Chinese ideals of beauty for centuries. This post will focus on the two of the four: 西施 (xī shī) and 王昭君 (wáng zhāo jūn.)

西施 (xī shī) was born 施夷光 (shī yí guāng) in the Spring and Autumn period of China (春秋时代; chūn qiū shí dài.) Mind you, this period of time in Chinese history spanned from 771 BC to 476 BC, approximately. During this time, China was not a unified entity. It was split up into various governing states, each with its own ruler, royal family, military, etc.

Every time Xi Shi went to the neighboring stream to wash her clothing, the fish in the water would stare endlessly at her face, forget how to swim, and sink into the depths of the stream. Other stories say that her beauty made the fish feel ashamed of themselves and they would swim into the depths of the stream, as to avoid feeling inferior to Xi Shi’s exquisite beauty.

HER ROLE IN BRINGING DOWN A KINGDOM

XiShi was born in the Yue state (越国; present-day Zhejiang), as stated above. The ruler of this state, 越王勾践 (yuè wáng gōu jiàn) had a rivalry with the ruler of the Wu state (吴国), 吴王夫差 (wú wáng fū chà). Their rivalry started because of various reasons unrelated to 西施.

The rivalry reached a certain point, overflowed and the two kingdoms went to war. And the Yue state lost.

The losing party, in that era, typically became slaves to the victorious party. GouJian lost his status as king and had to serve FuChai. But GouJian obviously wants his kingdom back. So he starts making plans to take down FuChai with his advisor, 范蠡 (fàn lí.)

Despite being an incredibly able ruler, FuChai has a weakness that foreshadows the end of his reign. His love for beautiful women is common knowledge, and FanLi bases his plans off of the fact. FanLi finds two alluring women, one of whom is XiShi and the other, 郑旦 (zhèng dàn.) They undergo three years of training on dancing and singing, and once the three years end, they are both sent to FuChai’s palace.

ZhengDan sort of fades from the story because XiShi becomes FuChai’s favorite concubine. Her unparalleled beauty seemingly bewitches FuChai and he stops carrying out his duties as a ruler. The people get angry and the officials get anxious as the Wu state begins to spiral downward.

GouJian monopolizes on the situation and sends his army into the Wu state. He takes back his own territory, acquires the Wu state and XiShi’s duties have thus ended.

When FanLi began to search for women to carry out his plans, he encountered ZhengDan and XiShi. He fell deeply in love with XiShi and before she was sent to FuChai, XiShi began to reciprocate FanLi’s affections.

XiShi was born in the BC era, so historical records on her existence are scarce. People know that she played an important role in bringing down the Wu state, but no one really knows what happened to her. The various endings to her story are as follows:

When the Wu state was destroyed, XiShi and FanLi left the insanity of the royal palace and married.
When FuChai realized that GouJian was turning the tables on him, FuChai set his palace on fire and XiShi died in the fire.
When GouJian defeated FuChai, GouJian’s wife became incredibly jealous of XiShi’s beauty and drowned her.

王昭君 was born 王嫱 (wáng qiáng) in present-day Hubei to a humble family. Like XiShi, she’s from the BC era, but lived in the Han Dynasty, a long ways from the Spring and Autumn period. Why? Because China had to be unified by 秦始皇 (qín shǐ huáng), the Qin Dynasty had to fall, and the Han Dynasty had to be started. Events like this usually span a hundred to two hundred years.

During these times, the royal family would select women from the general population to become concubines. Many times, too many women were selected, so artists would paint paintings of the women and give them to the emperor.

Don’t underestimate the importance of these artists. The degree of beauty expressed by the picture could make the difference between becoming a favored concubine or a lowly servant. So many times, selected women would bribe these artists to paint unearthly but beautiful paintings of their faces.

Wang ZhaoJun didn’t want to bribe the artist, 毛延寿 (máo yán shòu). Maybe she was cocky, maybe she was trying to live with principles, but no matter. Her decision affected her rank and she entered the harem as a servant. Mao YanShou decided to draw an incredibly ugly picture of Wang ZhaoJun, and the emperor, 汉元帝 (hàn yuán dì), did not choose her.

As the years went on, Wang ZhaoJun was disappointed with herself because the emperor never favored her. So when the leader of the Xiongnu people (匈奴; xiōng nú), an ancient ethnicity that has since assimilated into other cultures, went to the emperor to ask for a bride of the Han ethnicity (the majority of China’s current population), Wang ZhaoJun wrote a letter to the emperor, saying that she would be the bride. The emperor looked at Wang ZhaoJun’s painting, granted her wish, and prepared her for the long journey to the Xiongnu empire. Keep in mind that the Xiongnu empire was much stronger than the Han Dynasty and in order to avoid war, the emperor had no choice but to grant their wishes.

The journey to the Xiongnu empire in the north was exhausting as the roads were bumpy and various animals decided that they would have a shouting competition on arguably, the saddest day of Wang ZhaoJun’s life. In order to calm herself down, she began playing the 琵琶 (pí pa), a Chinese instrument. As she was playing music, the geese flying south for the winter saw her incredible beauty and forgot how to fly. They fell from the sky and since then, 落雁 has been used to describe Wang ZhaoJun.

THE REST OF HER LIFE

Wang ZhaoJun spent the rest of her life at the Xiongnu empire. The Xiongnu leader died within a few years of their marriage (he was already incredibly old) and despite her intentions to go back to China, the emperor ordered her to follow Xiongnu customs. According to Xiongnu customs, Wang ZhaoJun would have to marry the incumbent leader of the Xiongnu clan. She did so and never returned to China.

HOW TO USE “沉鱼落雁” IN A SENTENCE

1. 这般沉鱼落雁的容貌，令我一见钟情，实在是美得惊人。
I fell in love with her incredible beauty at first sight; her beauty is stunning.

2. 到她长大成为沉鱼落雁那般的姿色，肯定会让她爸爸头昏脑胀。
Once she grows into a beautiful woman, her dad will worry about her well-being even more.

3. 对我来说，沉鱼落雁向来是形容古典美女的容貌，与现代美女的标准隔了一大段距离。
I think that this idiom encapsulates beauty standards that were prevalent back then; they bear few similarities to modern beauty standards.