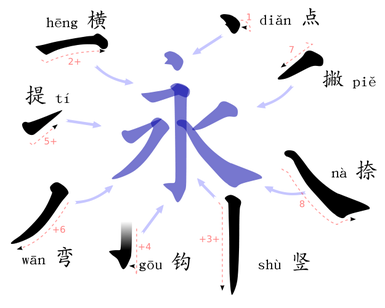 Modern Chinese characters have their roots in calligraphy, so stroke order is vital in writing Chinese. Having the wrong stroke order would cause ink to fall differently on the page and make Chinese cursive literally indistinguishable. No worries, we're here to help!

Follow these basic 7 tips and you’ll be on your way to better Chinese handwriting!

When a Chinese character is “stacked” vertically, like the character 立 (lì) or “to stand,” the rule is to write from top to bottom.

When a Chinese character has a radical, the character is written left to right. The same rule applies to characters that are stacked horizontally. Take a look at the “吃 (chī)” example below, which means “to eat.”

When you are writing a character that is centered and more or less symmetrical (but not stacked from top to bottom) the general rule is to write the center stroke first. Check out the character “小(xiǎo)” which means “small.”

Horizontal strokes are always written before vertical strokes. Check out how to write the character “十(shí)” or “ten.”

Remember this step as, "You want to fill the closet before you close the door.” After you write the middle strokes, close the frame, such as in the character “回(huí)” or “to return.”

For strokes that cut across many other strokes, they are often written last. For example, the character 半 (bàn), which means “half.” The vertical line is written last.

However, there are always exceptions to everything. In order to truly master stroke order, you need to increase your Chinese skill on a whole and be exposed to new vocabulary.