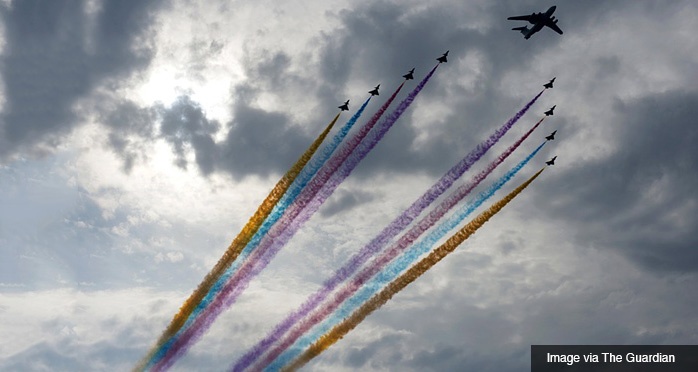 The giant military parade on "Victory Day," September 3rd, is only a few hours away.

This day commemorates the 70th anniversary of China’s triumph over Japan in World War II, which ultimately brought the end of the war. China is estimated to have lost over 35 million people (the exact figure is yet to be confirmed) in the years of 1937 – 1945.

This is a new national holiday created by President Xi JinPing. It is officially known as “Victory Day of the Chinese People's War of Resistance Against Japanese Aggression and World Anti-Facist War” or ”中国人民抗日战争胜利纪念日.“

Since this is a new holiday, workers have been given the day off, and schools were advised to open the week following September 3rd.

A spokesperson said that despite commemorating the end of World War II, the Victory Day parade is not directed towards any specific country. Rather, it is a sign of peace and how China is willing to defend it.

WHAT IS A MILITARY PARADE?

For those who may be unfamiliar with this concept, a military parade is a formal procession of soldiers marching in unison and in a tight formation. The Chinese People's Liberation Army has adopted the specific "goose-step" march, which involves swinging their arms and legs forward dramatically. In Chinese, this is known as "正步 (zhèng bù)" or "upright march," and is often taught in elementary schools.

WHO / WHAT WILL BE IN THE PARADE?

Over 12,000 People’s Liberation Army troops will march across central Beijing and Tiananmen Square.

Chinese World War II veterans will also be in the parade, on motorized vehicles. The average age of these veterans is 90.

New military equipment, including tanks, missiles, anti-aircraft carriers, and assault helicopters are expected to debut at the parade.

Over 200 aircraft are expected to fly in the parade. In preparation of this, the government has deployed trained monkeys and falcons to keep the skies clear of birds. (The monkeys have been trained to destroy nests in trees.)

2,400 singers and musicians have been recruited to sing in a choir during the military parade.

3,700 journalists have applied to watch the parade in person.

The main street is closed to pedestrians, however it will be broadcast via CCTV and streamed live by Xinhua News.

Subway routes will shut down and streets closed. Hotels in the vicinity will not be accepting outside guests.

Hospitals in the area are also closed, although emergency services will be open.

Major tourist destinations are also closed, including the Forbidden City, which means travelers will have to postpone their sightseeing plans.

The Shanghai and Shenzhen Stock Exchange are scheduled to shut down from Thursday to Sunday.