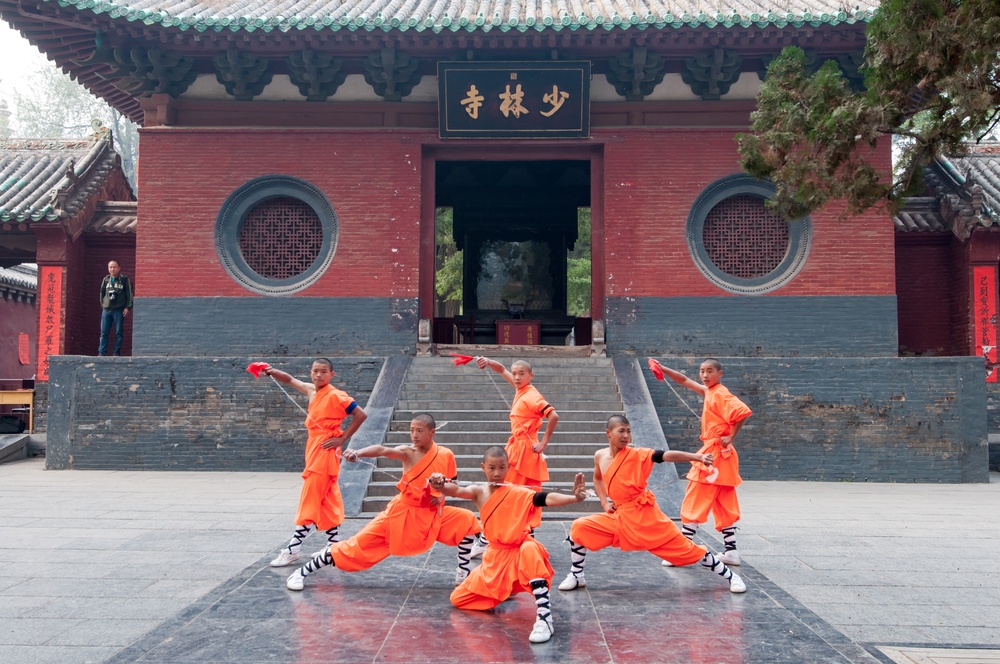 Kung fu is probably one of the most recognized elements of Chinese culture, having made its way to international audiences through movies and TV shows. In ancient Chinese, kung fu (Mandarin: 功夫 gōngfū) meant “utter devotion,” and today it is translated as “accomplishment of man” (功 means a feat of hard work, and夫 means man). While kung fu is an umbrella term for hundreds of styles of Chinese martial arts, the most renowned martial arts masters were Buddhist monks from the Shaolin Temple (少林寺 Shàolínsì) in Henan province. Around 1,500 years ago, the monks at Shaolin Temple created a mystical fighting art that unifies the physical and spiritual powers of the body, providing the inspiration for the modern-day kung fu fairytales.

Origins of the Shaolin Fighting Style

While the origins of the Shaolin kung fu are almost completely shrouded in mystery, one narrative that tends to stick is that an Indian monk who went to China at the behest of the Chinese Emperor, a devout Buddhist, to teach Buddhism. With him, he took Indian yoga practices that build the physical strength and endurance necessary for long periods of meditation and the aesthetic lifestyle of a monk. The Chinese emperor at the time had built a monastery in the woods at the base of the Shaoshi (少室 Shǎoshì) mountain in anticipation of the Indian monk to coming to teach disciples, thus naming it Shao after the mountain, and lín (林), as in "forest." In order to survive and live a self-reliant life in the woods, the Shaolin monks had to learn defensive arts to protect themselves from bandits and wild animals, which is possibly how the ascetic yoga brought by the Indian monk developed into a fighting form.

The Journey of a Shaolin Monk

The life of a Shaolin Monk is relentless practice in pursuit of physical and mental perfection. Monks at the Shaolin monastery explain that the art of Shaolin is about constantly improving, and one never stops learning in a lifetime of practice. The most important stage of a monk’s development is in childhood, so children are trained day in, day out at a very young age, similar to the way Chinese Olympians are started in elementary school.  A ten-year-old disciple’s day starts at 4 am in the morning, with a Shaoshi mountain and a crawl back down, before constant grueling drills with breaks only for Buddhist education or austere meals. According to the monks at the temple, youth is a very important stage in the development, as children not only are faster but also can become extremely flexible around five or six years old. is an important characteristic for a monk to have, as it helps with pain tolerance. The more pain a monk is able to take, the faster their progress will be, so it is essential to harness their potential at this age.

Once young monks are primed for the physical demands of becoming a Shaolin master, much attention is paid to their spiritual development. While monks harden themselves every day with physical challenges, the power of Shaolin is only fully harnessed by those who know how to direct its spiritual energies, which are called qigong (气功 qìgōng). Only monks who have at least 10 years of advanced kung fu training can even attempt to use qigong.  and movement techniques developed through meditation and study of Zen Buddhism produce a type of energy called qi in the lower abdomen. The aim of qigong is to control the flow of this energy so that it can be directed to any part of the body, making that part of the body seemingly invincible and incredibly powerful. Examples of the mysterious workings of qi are monks resisting the tip of a spear with their neck, piercing glass by throwing a needle, or smashing bricks with the head.

In the past, the effects of qigong were believed to be magical, and practitioners were compared to the eight Daoist immortals. Indeed, those who master the techniques of qigong are said not to experience physical deterioration even as they reach fifty or sixty. The esoteric religious aspect of is what gives kung fu its mystical appeal, which has sometimes been reimaged in the movies as people flying around or using magic. However, modern-day scientific studies have shown that qi movements can actually be picked up on a heat detector.

Related: The Legend of the White Snake

Differences Between Kung Fu and Other Martial Arts

Shaolin kung fu is a philosophy as much as it is a fighting style. Aspects such as the qigong are rooted in traditional Chinese medicine, as well as Buddhism and Daoism. Kung fu is highly valued in Chinese culture because it teaches respect, patience, humility, and morality. While some martial arts systems are rooted in extreme violence and aggression, Shaolin kung fu holds that selfishness and anger will crumble before a calm and peaceful and that these negative emotions can be used against an offender. Because of its broad philosophical nature, the techniques of Shaolin kung fu are manifold compared to other martial arts such as Karate, Judo, Jujitsu, and Taekwondo, which specialize in only a few techniques. A Shaolin monk is able to deal with anything an attacker throws at them. For example, around 500 years ago, Shaolin monks used sticks to fight off Japanese pirates in South Eastern China, who presumably would have been armed with steel.

Much of the modern conception of kung fu comes from wuxia films, or martial arts fiction, which emerged from Hong Kong in the 1960’s to 1980’s. In the 1970’s, Bruce Lee brought the genre to international fame, helping change the way Asians were perceTheived in Hollywood and drawing interest to Chinese culture. Lee helped make kung fu not only a pop culture but also a symbol of Chinese nationalism. While Bruce Lee was a dead serious professional who embodied the "utter devotion" aspect of kung fu, Jacky Chan's brought a more comedic and light-hearted atmosphere to the genre with classics like "Drunken Master."