DuanWu Festival, also known as Dragon Boat Festival, is a Chinese National Holiday It is observed on the 5th day of the 5th month of the lunar calendar. On this day, people eat zongzi, and watch dragon boat racing.

The dragon represents yang – it is masculine, bright, powerful, solar. On the other side, the phoenix represents yin – it is feminine, dark, weak, lunar. Since DuanWu Festival always occurs around the same date as the summer solstice, the longest day of the year, we celebrate the sun with dragons.

Like QingMing Festival, the origins of DuanWu Festival can be traced back to a single person. Qu Yuan was a poet and minister official during the Warring States Period of ancient China (340–278 BC.) He was highly respected, until other ministers slandered Qu Yuan, causing him to be exiled. During this time, he fell into deep depression, while writing some of the most beautiful poems of his literary career, expressing anxiety and his patriotism for the State of Chu. After hearing that the State of Chu was conquered by the State of Qin, he held a rock and waded into the Miluo River, eventually drowning himself.

Legend has it that the locals tried to save Qu Yuan, by racing out to the river on their boats. After seeing that he could not be saved, they tossed rice in the water as an offering to his spirit, as well as to dissuade fish from his body. They also banged drums to keep evil spirits and the fish away from his body.

To this day, glutinous rice dumplings called zongzi are eaten, representing the rice that was thrown in the water. Dragon Boats are also raced to the beat of Chinese drums, to signify the local villagers rushing onto the water to save Qu Yuan.

Read more about the customs of this holiday below!

Dragon Boat Racing is a competitive sport in some regions of China. This sport gains the most attention during DuanWu Festival. A dragon boat race is typically a sprint across a short body of water, however some long-distance races do exist. A typical dragon boat crew is comprised of 20 paddlers, one steersmen, and one drummer.

The most unique part of the Dragon Boat Race is the role of the drummer. Every crew has one member that sits at the bow of the boat and beats a drum, setting the rhythm for the paddlers’ strokes.

Dragon boats are often painted with colorful scales, and have a decorative dragon head and tail. 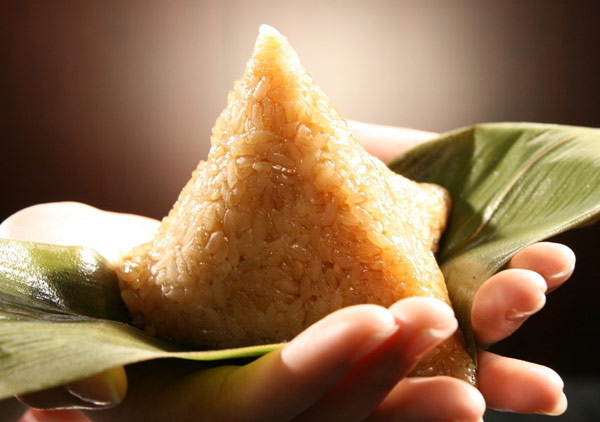 粽子 also known as zongzi, are glutinous rice treats with a filling. They are wrapped in banana or bamboo leaves in a triangular shape, and then steamed. They are served hot. While they are known for being eaten during DuanWu festival, they are available year-round in China and at some Chinese markets. The most common fillings include dates, red bean paste, and occasionally pork.

Summer is a time where diseases thrive. Realgar wine, an alcoholic drink made from fermented cereals, was thought to keep evil spirits, insects, and diseases away, as well as serve as an antidote to toxins.

This is somewhat ironic, considering that the realgar mineral has toxic properties similar to arsenic. The practice of consuming realgar wine during DuanWu Festival has become rare due to increased awareness about its toxicity.

Some sources claim that during the race to save Qu Yuan, a doctor threw realgar into the water to repel evil spirits from his body. Thus this custom was born.

Here are a few sentences to help you learn Chinese online for the dragon boat festival!

Example sentence: 你喜欢赛龙舟吗？
Translation: Do you like dragon boat racing?

Example sentence: 端午节那天一定要吃粽子！
Translation: You must eat zongzi on the day of DuanWu Festival!