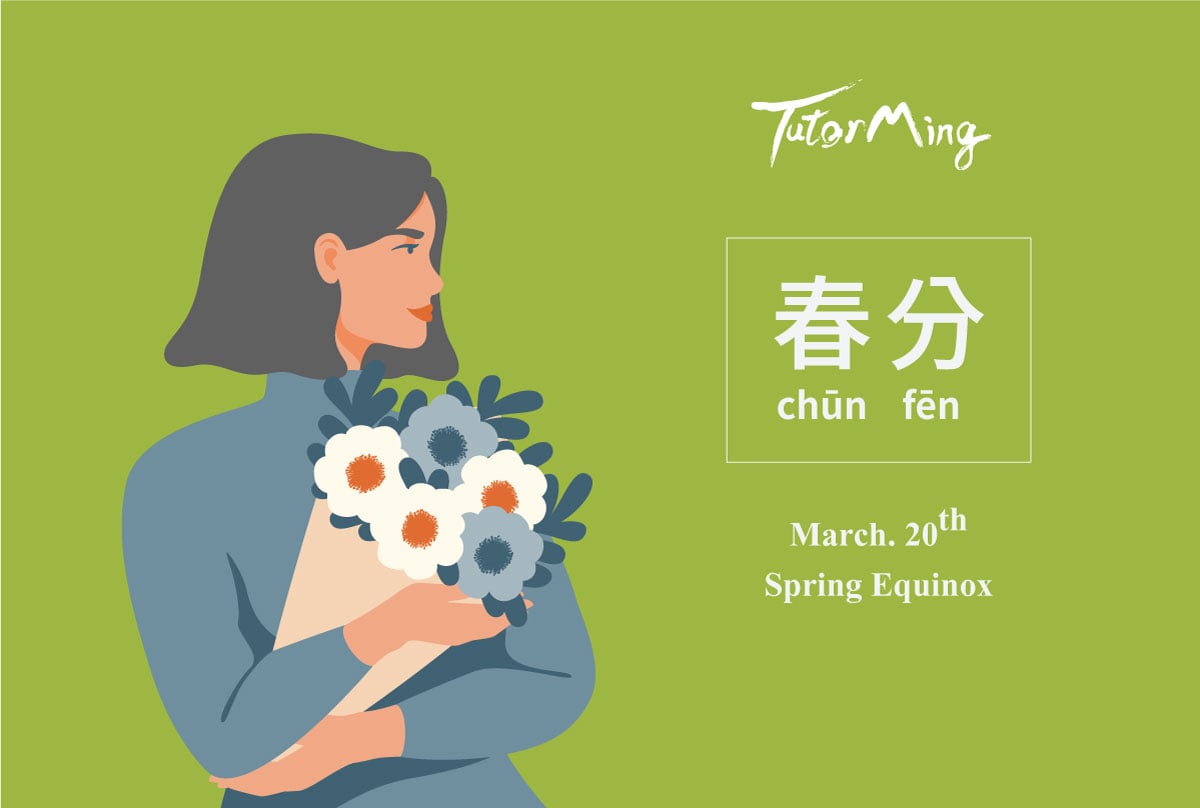 春分, the fourth solar terms of the year, is the day that position of Sun is exactly above Earth’s equator. To describe this phenomenon in Chinese, we would say that 太阳此刻刚好到达黄经零度 Tài yáng cǐ kè gang hǎo dào dá huáng jīng ling dù

On the day of 春分, the length of day is now almost equal to night, approximately about 12 hours each, and now it’s also the time that you can actually feel spring is here, or more precisely, spring is now in the Northern Hemisphere.

Rainfall has always played a critical role to agriculture activity, especially during this period of time. There was an old Chinese saying that 春分無雨是空年，春分有雨是豐年 Chūn fēn wú yǔ shì kōng nián, chūn fēn yǒu yǔ shì fēng nián which literally means that if it’s not raining on the day of spring equinox, it would be an empty year; if it’s raining on the day, it would be a harvest year.

Egg balancing, 竖蛋 Shù dàn, one of the most popular Chinese traditional activities has been widely practiced throughout the whole country on the day of 春分. According to Chinese culture, ancient Chinese people believe that 阴气 Yīn qì and 阳气 Yáng qì of the nature are reaching at the balanced point on the day, so it would be easier to balance an egg. A famous Chinese proverb said that 春分到，蛋兒俏 Chūn fēn dào, dàn er qiào, which indicates that eggs become so popular when 春分 is here.

As the 阳气 Yáng qì of your body has been getting stronger since last solar term, now is such a perfect time to nourish it and keeps it growing gradually, and we called it 养阳(气) Yǎng yang (qì).

Traditional Chinese Medicine (TCM) suggested that if you don’t have enough 阳气in your body, you may easily to feel fatigue and sleepy, and we called it 春困 Chūn kùn. Adding ingredients that helps grow 阳气, such as 姜 Jiāng (ginger), 葱 Cōng (scallion), 韭菜 Jiǔcài (Chives), 醋 Cù (vinegar), or 白酒 Báijiǔ (white wine) while cooking cold food, or 阴性食物 yīn xìng shí wù, like crabs and shrimps, would help moderate them to be mild to your body, and so to the阳气of your body.

According to TCM, spring is considered as the season associated with liver, which is the organ linked to element “wood”. If you do not take care of your liver during this period of time, too much “heat” would accumulate in your body and cause you symptoms such as headache, easy to get thirsty, bloating at abdomen, and some pimples might pop up on your face, especially on the left cheek. To improve this situation, you may lower the heat of liver by consuming green vegetables of the season, such as sprouts, broccoli, green soybean, and cabbage. Meanwhile, as spring is the season of blossom, herbal tea would be another good choice to have during this period of time. This concept is also reflected what Confucius said in The Analects, 不时不食 Bù shí bù shí, which literally means not to eat (food) not in the time.