What Was The Silk Road And Does A Modern-Day One Exist? 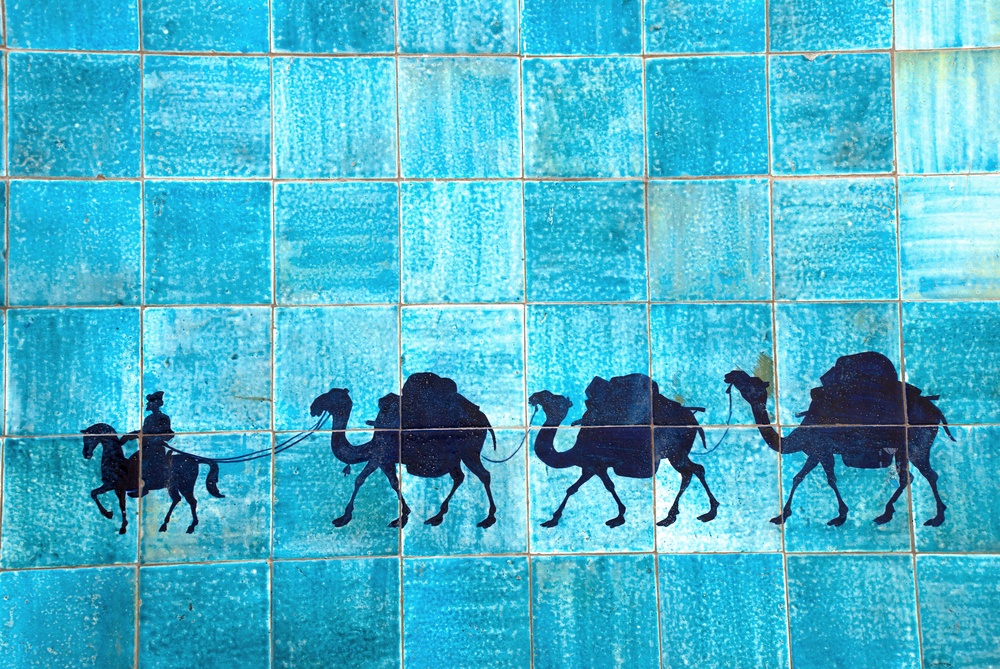 Over two thousand years ago, ancient Roman demand for luxury silks imported from China was so strong that the Roman Senate tried, in vain, to ban the consumption of silk. Rome eventually procured its own silk production methods when Byzantine (Eastern Roman) Emperor Justinian (527-565 CE) reportedly sent spies to China to steal silk worms and bring them back to Greece. However, Byzantine silks never attained the quality of those imported from China, and it was not until European colonial powers dominated overseas trade that the importance of the Silk Road (丝绸之路 Sīchóu zhī lù) over land routes connecting the West to China . During their heyday, the Silk Roads—both overland and maritime routes—profoundly influenced the Middle Eastern, Central Asian, Indian, Russian, European, and African civilizations they connected, stimulating the first truly international trade network, and marking the beginnings of globalization.

Just as Silk Road trade routes made ancient China prosperous, modern China's economic miracle is a product of globalization. In recognition of the importance of global trade, and in order to offset slowing growth and excesses of industrial capacity at home, China has announced the "One Belt One Road" (一带一路 Yīdài yīlù) initiative, which proposes to create cohesive regional economic zones connecting China to the rest of the world.

The Han Dynasty (汉朝 Hàn cháo) Chinese called Rome as Daqin (大秦 Dàqín), or "Great Qin," named after the first emperor of China, Qin Shihuang, indicating that they viewed Rome as an equal in stature and prized relations and trade with it. The Silk Road seems to have first emerged around 114 when Chinese diplomat Zhang Qian ventured out into Central Asia and established trade relations with Middle Eastern, Central Asian, and Indian civilizations, all of whom had been trading Rome. When Zhang Qian arrived, he discovered that these regions had already been trading in Chinese goods, especially silk.

When the Han emperors discovered the wealth they could procure from the Central Asian corridor, they sought to actively control it with military force. In general, the city-states along these trade routes found they could carry out trade more steadily with Chinese garrisons protecting them, and did not resist occupation. Subsequent Chinese dynasties, most notably the cosmopolitan and expansionist Tang Dynasty (唐朝 Táng cháo), ventured into the Central Asian region to further secure the lucrative trade routes.

Some historians believe paper-making technology was actually transmitted from the Chinese to the Arabs at the Battle of Talas, where the Abbassid Caliphate stopped the advance of Tang Chinese armies across modern-day Kazakhstan and Kyrgyzstan. The evidence that the Arabs learned the technology from paper-making prisoners is inconclusive, but it is clear that the Silk Roads were not only a platform for the trade of material goods, but also a channel for the spread of ideas, religion, and culture. During the Tang Dynasty, cultural exchange reached its peak, with Buddhism, a foreign religion, becoming a major influence in Chinese culture and state affairs. The fact that many Western and Chinese historians today consider the height of Tang prosperity and culture the golden age of Chinese dynasties demonstrates how important connection along the Silk Road was to Chinese civilization. 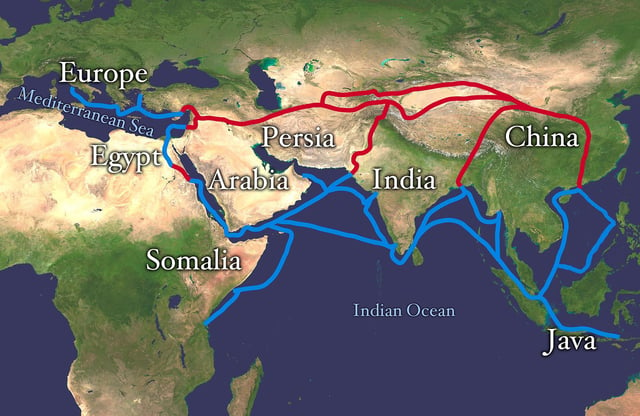 The Central Asian corridor located extending west of modern-day Xinjiang was not the only route connecting East and West, however. A 2,000-year-old Roman glass bowl found in a Han Dynasty tomb in Guangzhou indicates that a maritime trade route stretching from northern Vietnam around modern-day Hanoi all the way to Roman-controlled ports in Egypt probably existed as far back as the first century BCE. The maritime route became increasingly important as China's naval technology became more advanced. This development was highlighted during the Ming Dynasty expeditions of Zheng He in the early 1400's CE. Before Columbus set out to discover the Americas, China sent a fleet of over 300 vessels through Southeast Asia, South Asia, and Arabia, and eventually to Africa to secure trade routes, establish new trade relations, and display the grandeur of Ming wealth. It was only when imperial intrigue caused the Ming empire to pivot towards internal affairs that China curtailed the expansion of trade relations into other parts of the globe.

The Silk Road and the Chinese Economic Miracle

Many changes have occurred in China since Imperial Dynasties occupied parts of Central Asia and sent fleets through the Indian Ocean to secure trade routes. However, the present Chinese government clearly sees the importance of trade relations along historical routes as an important part of China's developing role in the global economy. As China reaches a leveling out stage in its economic growth, and as excessive industrial and labor capacity starts to create pressure at home, China is looking to developing countries, especially in the Middle East, Central Asia, and Southeast Asia to expand its development. Persuading partners with practical projects like infrastructure, China is proposing to renew ancient trade ties with its "One Belt One Road" initiative.

One of the "One Belt One Road" projects that taken shape is the China-Pakistan Economic Corridor (CPEC), a 46 billion USD investment in highways, pipelines, railroads, gridlines and other much-needed infrastructure for Pakistan. In the year 2013, Pakistan only received $1.46 billion of international investment, so the aid being provided by China is clearly significant for Pakistan, whose Prime Minister Nawaz Sharif has called relations with China "the cornerstone of Pakistan's foreign policy." Most jobs from projects like the CPEC will go to Chinese workers and most of the proceeds will go to Chinese development companies, helping to offset slowing growth at home, but countries like Pakistan are set to benefit tremendously from the infrastructure projects China is undertaking.

It's clear that China's key export along the Silk Road is no longer silk, but infrastructure. Between 2011-2013, China laid down more concrete than the US did during the entire 20th century. China has also been the world's largest installer of solar panels since and competes with Japan as the world's top high-speed rail developer. Recently, China opened a railway freight line that stretches from Zhejiang (浙江 Zhèjiāng) on China's east coast to London. President Xi Jinping has made railway a top priority, promising to expand China's railway network with $503 billion USD of investment by 2020. Although rail can carry less freight volume, it is both cheaper and faster than cargo shipping. Practical investments like railways across regions in the "One Belt One Road" initiative are usually welcomed by their host countries because infrastructure unfailingly brings in added revenue to the region.

China's "One Belt One Road" is very much in its initial stages. In 2015, China announced there were 160 billion USD worth of infrastructure projects in planning or under construction through the AIIB (Asia Infrastructure Investment Bank), which provides the financial foundation of the "One Belt One Road" initiative. With a total cumulative investment of 4 to 8 trillion USD expected over the course of the entire lifetime of the AIIB, the amount spent on Silk Road projects is only a fraction of what will be spent in the future. With projects such as the China-Pakistan Economic Corridor and Zhejiang to London freight train already completed, it looks China is serious about creating a cohesive economic zone in Central Asia and an integrated economic "belt" across Southeast Asia and South Asia. While the US continues to invest in countries like Pakistan primarily through defense aid, China seems the be the only nation offering practical investment, which could go a long way towards strengthening China's role in the global economy.