Looks like China now wants a slice of the superhero action. Hot off the tails of their “Captain America: Civil War” success, directors Joe and Anthony Russo have signed on to produce a Chinese superhero franchise, nicknamed “Captain China.” The film will be produced with Fanjin Media in Beijing, and will feature an all-Chinese cast.

Unrelated to the upcoming Russo brothers' films, a comic titled Captain China is already in circulation, which is published by Excel Comics. Excel comics describes the story on the website as: “The first Chinese super hero character aimed at capturing the main-stream consciousness of China. [It will] give insight to China's current political stance, social environment, and cultural differences by blending complex characters, historical information, geographic locations, comic satire, and over-the-top action!”

Just like his American counterpart, “Captain China is an enhanced soldier who survives the Mao era, sleeps for 50 years, and wakes up in the modern age,” reports Quartz. Unlike Captain America, who bears a shield, Captain China is armed with a Mauser pistol – a weapon used by the Red Army in World War II. 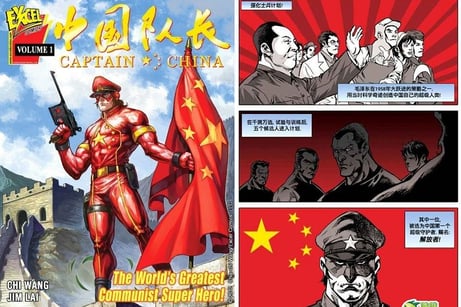 The Russo brothers have stated that their films will focus on an origin story for the new superhero, who will not be called “Captain China.” The story in development is about an superhero who can control things will his mind, and will be very similar to the “Captain America” films.

It is no surprise that directors wish to enter the cinema landscape in China. With a population of 1.3 billion people, it is clear that China is a very attractive market for Hollywood. In February of 2016, box office numbers in China reached an all time high, pulling in over 1 billion U.S dollars, beating U.S numbers for the first time. If this trend continues, China will surpass America as the world’s largest film market by 2017.

Films with Chinese influences have done well in both in the U.S and Chinese cinema scene. The Kung Fu Panda series has been extremely well-received by Chinese audiences, making it quite a lucrative endeavor for DreamWorks Animation. Netflix acquired the rights to the Crouching Tiger, Hidden Dragon sequel, which had its own release in China, to some degree of success. (You can read our review here.) In fact, China’s influence is so large that Marvel Cinematic Studios recently used that as an excuse for whitewashing one of their upcoming films, Doctor Strange. A screenwriter hinted that Marvel chose to cast white actress Tilda Swinton, into the role of the Ancient One (a Tibetan monk in the comics) in order to avoid upsetting China. It’s not the first time the Hollywood scene has come under controversy for mishandling Asian roles in movies.

Marvel may very well have made this casting choice for business purposes. Aside from having an audience of over a billion people, China still retains control over which foreign films can enter their markets, and establishes a revenue-sharing mode with those that do. That is also likely one of the reasons why the Russo duo have signed on to produce a Chinese film. That, and the fact that Captain America: Civil War has reached higher ratings on Chinese social network site Douban than Avengers: Age of Ultron (despite the latter having a better box office performance) certainly indicates that the Chinese audience is receptive to the Russo duo’s cinematic flair.

"In the future, everyone will be focused on the China market. By working with the Russos, we want to use the best visual storytelling to make localized films that fit the Chinese market,” FangJin CEO Li Xing told THR.